On the previous day of a marriage or on the same day the Jaanavasam or the bridegroom’s reception takes place. The bridegroom is taken around the streets of the town in an open luxury car in a procession. In the olden days he was taken around in a chariot. The procession is preceded by the musicians playing sacred music and followed by women wearing splendid silk sarees, decked with flowers and jewelry, carrying trays full of the gifts. They carry clothes, jewelry, cosmetics, fruits, nuts and sugar candy in large trays for the bride. In this fashion they arrive at the venue of the marriage and are received by the bride’s people with much fanfare.

The most important part of the wedding ceremony is the ‘Thiru Mangalaya Dhanam’. The Mangalaya Dhaanam takes place only after the bride and groom recite several mantras assuring each other of sustained loyalty to one another, mentally, physically and spiritually, throughout their lives. While other dhaanams are given by hand and accompanied with water, the Kanika dhaanam is made by placing the girl on the lap of the father. Prior to this, the girl’s maternal uncle (mama) who is known as the ‘Murai Maapillai’ (the customary bridegroom) has to garland the bride and the groom to show that he has given his full consent to their marriage. 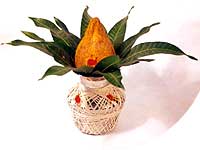 This is done because traditionally the mother’s brother had the preferential right to marry the girl. The marriage with the maternal uncle is not only common, but is very much in vogue even today in South India in many communities. Hence, it is necessary to ensure that the man who has a preferential right to marry the girl has forsaken it willingly. In small coherent communities this type of endogamous exogamy became quite essential to find the grooms within the community, who at the same time, do not belong to the same gotra. In fact, nowadays marriages with close relatives are becoming quite rare due to medical and genetic reasons.

The maternal uncle had apparently some disadvantages. Sometimes there could be a great deal of age difference between the bride and her maternal uncle. The pair may not always be emotionally and educationally compatible. On the other hand these marriages had many advantages especially from the point of view of the girl. The biggest advantage was that the maternal grandmother became the mother-in-law. In which circumstances the mother-in-law and daughter-in-law relationship would be much better than it used to be in other Indian communities. The trauma of transition, which an Indian bride faces, was largely avoided. The adjustment to the new joint family was easier. The question of ill-treating the girl by her own maternal grandmother would be almost out of question. The future of the girl would be safer and secure. The family wealth could stay within the family. The marriages would still take place even if the two families were not economically equal, since they were deemed socially equal. This custom has also been absorbed by the other Tamil communities. The fact that many Tamil women address their husbands as ‘mama’ indicates that marriage with the maternal uncle would have been extremely popular. 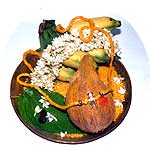 It is interesting that amongst my own community of Kashmir Pundits, where marriages with maternal uncle or for that matter any relative is unheard of. It is the maternal uncle who carries the bride and brings her to the marriage pandal. To my mind it is a vestige of an ancient custom when perhaps such marriages would have taken place among Kashmiri Pandits also. The reason why the maternal uncle carries the girl to the mandapam is to show the entire gathering that she is like a child to him. He publicly displays that she is too young for him to marry her and brings her voluntarily to be given away to another suitable groom. 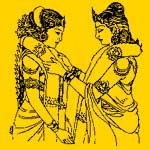 After the maternal uncle gives his public approval to the union, the Mangalaya Dharanam takes place. The thread of marriage is tied around the neck of the girl after it is blessed by the Acharya, the priests, elders and the assembled guests. The Mangalyam is a piece of turmeric tied to a yellow thread, which is tied around the neck of the bride by the groom to signify that the ritual of marriage is complete. Thirumangalyam is tied with three knots. The first knot is tied by the bridegroom. The second knot is tied by his sister and the third knot is tied by the mother of the bride. It is also to ensure that there are at least two witnesses to the marriage. This is followed by the ‘Paanigrahanam’, which is considered to be most auspicious for ensuring a safe and full-married life. After this the ‘Sambhavanai’ or the blessings, takes place. First of all the blessings are invoked from the ‘Acharya’ the guru. A bowl of rice is put in the madi (lap) of the bride as a blessing to say ‘let her be fertile and her household be plentiful’. It is followed by blessings by the maternal uncle and other relatives. Each one of them gives a gift of money along with a betel leaf to the bride.