According to many scholars the classification of Iyengars into Vadagalai and Tengalai is based on the Northern and Southern traditions. To be precise this classification was not based on migration but based on the use of language. The Vadagalai used more of Sanskrit and were mainly the followers of Sri Vedanta Deshiker, whereas the Tengalai used more of Tamil and were the followers of Saint Ramanujam, also known as the Tenth Acharya, who propagated Vaishnavism in a big way in South India. It is said that he admitted many non-Brahmins into Vaishnavism and made Vaishnavism a devotional movement. In fact, it is very interesting that among the twelve Vaishnavite Saints called Alwars only three are Brahmins.

Born at Sriperumbudur, Ramanujam spent much of his life in Kancheepuram in the service of Lord Varadharaja Perumal. It is said that Lord Perumal appeared to him in his dream and asked him to go to Srirangam and promote Vaishnavism from there. Hence, at the age of forty he went to Srirangam where he first performed the daily temple duty of Thirumanjam Kaikariyam (carrying water for the holy bath of the Lord). However, he was elevated to be the Madathipathi of Srirangam Math as per the wishes of the last Madathipathi. At Srirangam he had a lot of trouble with the Chola king, Krimikanda Chola, who was a puritan and fanatic Shaivite. He was incensed by the rapid promotion of Vaishnavism by Ramanujam and persecuted him. He wanted to blind him but somehow, the disciples of Ramanujam came to know about the plot. One of them, Kurathalwan, dressed like Ramanujam took the assault on himself while the others took Ramanujam away to Mel Kottai, (Narayan Puram) in Mysore. 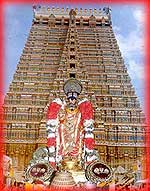 Presumable, after the death of Krimikanda Chola, Ramanujam returned to Srirangam and continued his work. Born in 1017 CE, he lived for 120 years and attained Nirvana at Srirangam, where his body has been preserved in a Samadhi. In India, there is a tradition of not cremating the Saints. Their bodies are normally kept in an underground chamber (samadhi) in a sitting position. The samadhis are frequented by the devotees who continue to feel the presence of the sage and experience spiritual bliss and vibrations at the holy spot. Everyone visiting Srirangam visits the Shrine of Ramanujam. A life-size black granite idol, sitting in a lotus position, has been installed over the Samadhi, for which daily pooja is being conducted. I have visited the shrine many times and have felt a sense of bliss. People believe Ramanujam is very much around.

The temple of Lord Ranganatha at Srirangam is one of the most beautiful temple complexes in the world. It is vast and sprawling with high and beautifully ornate gopurams (towers). It is one of the few temples where the South Indian temple paintings have survived. The paintings both of the Pandyan and Nayakar periods can be seen; some of which have been recently restored by experts from the National chemical laboratory. The unique feature of the temple is a giant-size Garuda installed in front of the shrine of Ranganatha. I have never seen a Garuda of this size anywhere in the country. The Garuda is beautifully carved in wood and is exquisitely painted. Everyone, first prays to the Garuda before entering the shrine of the Lord. The Garuda is supposed to be the vehicle of the Lord and is also known to be a prime devotee of the Lord, and hence called Garudalwar.

The architecture of the Srirangam town, which is about five miles from Tiruchirapalli, is most unique and speaks volumes about the way of life of the Brahmins who lived here in the past. It is unfortunate that most of the old houses are being pulled down and replaced by less elegant structures. There are a handful of Vedic scholars still living in Srirangam. Many of them can be seen reciting Vedas in the temple in the mornings and evenings. However, the number of Vedic scholars is continuously on the decline due to lack of patronage and less interest shown by the younger generation to undertake such a strenuous course of learning which does not ensure a decent living.

The Math at Srirangam is still functioning in the tradition of Ramanujam. The present Madathipathi of the Srirangam Math is Sri Sriranga Narayana Jeer. The Madathipathi is also the custodian of the Ranganatha temple. He has the responsibility of starting and finishing the daily rituals and worship in the temple. Normally, he cannot stay out of Srirangam Math over night unless it is absolutely necessary. For this reason one can normally be fortunate to meet the Jeer and take his blessings. The present Jeer, who was earlier a temple priest in Coimbatore, is a well-read scholar. I take his blessings whenever I go to Srirangam. He is adept in all the Vedas and is an expert in performing yagas. Due to his spiritual practices he is known to be bestowed with divine powers. At times, involuntarily, he makes prophesies, which he says are revealed as per the wishes of Lord Ranganatha, and many of them come to pass.