Were you a nerdy kid? Definitely. I was into comic books and video games. Did you find it difficult to talk to girls like Raj does in 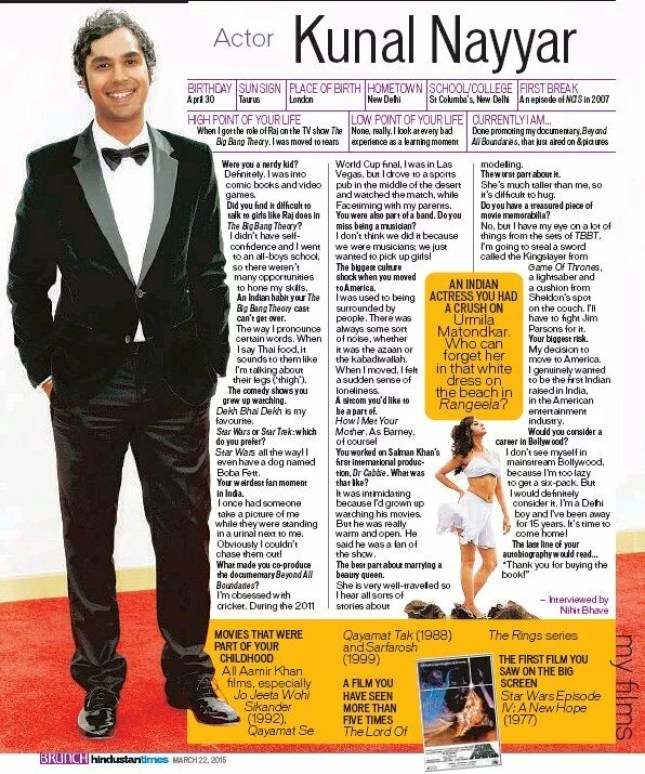 The Big Bang Theory? I didn’t have selfconfidence and I went to an all-boys school, so there weren’t many opportunities to hone my skills. An Indian habit your The

Big Bang Theory cast can’t get over. The way I pronounce certain words. When I say Thai food, it sounds to them like I’m talking about their legs (‘thigh’).

The comedy shows you grew up watching.

Dekh Bhai Dekh is my favourite.

Star Wars or Star Trek: which do you prefer?

Star Wars all the way! I even have a dog named Boba Fett. Your weirdest fan moment in India. I once had someone take a picture of me while they were standing in a urinal next to me. Obviously I couldn’t chase them out! What made you co-produce the documentary Beyond All

Boundaries? I’m obsessed with cricket. During the 2011 World Cup final, I was in Las Vegas, but I drove to a sports pub in the middle of the desert and watched the match, while Facetiming with my parents. You were also part of a band. Do you miss being a musician? I don’t think we did it because we were musicians; we just wanted to pick up girls! The biggest culture shock when you moved to America. I was used to being surrounded by people. There was always some sort of noise, whether it was the azaan or the kabadiwallah. When I moved, I felt a sudden sense of loneliness. A sitcom you’d like to be a part of. How I Met Your Mother. As Barney, of course! You worked on Salman Khan’s first international production, Dr Cabbie. What was that like? It was intimidating because I’d grown up watching his movies. But he was really warm and open. He said he was a fan of the show. The best part about marrying a beauty queen. She is very well-travelled so I hear all sorts of stories about modelling.

The worst part about it. She’s much taller than me, so it’s difficult to hug. Do you have a treasured piece of movie memorabilia? No, but I have my eye on a lot of things from the sets of TBBT. I’m going to steal a sword called the Kingslayer from

Game Of Thrones, a lightsaber and a cushion from Sheldon’s spot on the couch. I’ll have to fight Jim Parsons for it.

Your biggest risk. My decision to move to America. I genuinely wanted to be the first Indian raised in India, in the American entertainment industry.

Would you consider a career in Bollywood? I don’t see myself in mainstream Bollywood, because I’m too lazy to get a six-pack. But I would definitely consider it. I’m a Delhi boy and I’ve been away for 15 years. It’s time to come home!

The last line of your autobiography would read… “Thank you for buying the book!”